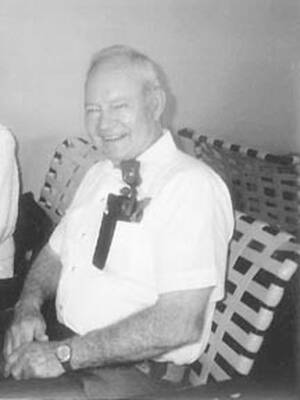 He graduated from Plains High School in 1939.  He later attended Dodge City Community College and Kansas State University.  While at Kansas State, he joined the United States Army Air Corp, serving as a B 17 co-pilot during World War II.

Upon his discharge in 1945, he returned to Plains and began his career in farming and ranching. Throughout the years, he operated a welding business and worked in the oil field.

He was a member of the American Legion Post #312, Veterans of Foreign Wars Post #3166, the 381st Bomb Group Memorial Association, Prisoner of War Stalag Luft III, and the Masonic Lodge No 105.

He enjoyed restoring antique tractors, tractor pulls, working in his shop, flying his aircraft, and spending time with his family and friends.

He was also preceded in death by son, Larry Michael Fox; and sister, Joyce Peterson.

Burial took place at the Plains Cemetery in Plains.

Memorials are suggested to the Kansas Honor Flight, the Plains Community Enhancement Foundation or the charity of the donor’s choice in care of the funeral home.

Condolences may be left at fidlerormebachmanmortuary.com.