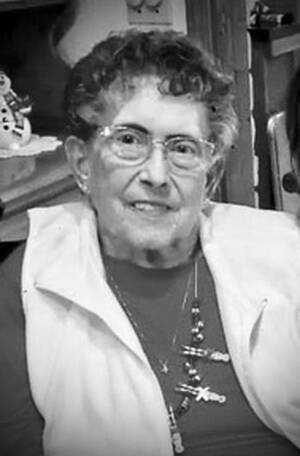 She graduated from Guymon High school with the Class of 1956.

Shortly after graduation, she attended beauty school in Tulsa, Okla.  She returned to Guymon to use her new skills at her job at Ester’s Dress Shop in downtown Guymon and to marry Jimmie Joe Rogers. He preceded her in death.

She married William H. (Johnny) Johniken in 1970. He preceded her in death.

In 1989, she started working for Walmart, three weeks before it opened in Guymon.  She would be one of the longest employed person for Guymon Walmart and she bragged she made her very best friends working at this job.

After retirement, she spent a couple years at the Heritage Center in Guymon, doing her favorite things, playing board games and talking.  She also enjoyed playing games on her iPad and texting with family and friends.

She was also preceded in death by her parents; sister, Edwina Palmer; stepson, Cecil Johniken; stepson, Todd Boyett; great-granddaughter, Breklann Rylee; and many other family members.

• Funeral services will be at 2 p.m. Monday, Jan. 23, 2023 at the Guymon First Baptist Church in Guymon, Okla., with Rev. Michael Carter and Rev. Randy Caddell presiding.

Burial will follow at the Elmhurst Cemetery in Guymon, Okla.

Condolences may be left at www.bunchroberts.com.