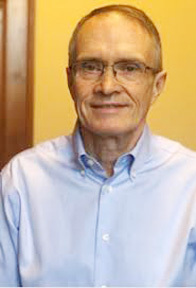 Marshall Lewis with Southwest Guidance Center was in Topeka last week for meetings.   We talked about funding, how telemedicine works in the mental health area, and the difficulties recruiting and retaining mental health professionals.

This week we are making the final tweaks to the House version of the budget bill.  Several items important to rural Kansas were added to the bill this week.

The first is doubling the funding to $3 million for the Kansas Teacher's Service Scholarship. This is a merit-based service obligation scholarship program that provides financial assistance to students and teachers pursuing bachelor's teaching degree programs, master’s degrees or endorsements in hard-to-fill disciplines or underserved geographic areas.  Recipients sign agreements to teach one year for each year of scholarship support in Kansas. Recipients are eligible to receive this scholarship for up to ten semesters, which includes both undergraduate and graduate work.

Another initiative is increased funding to support rural housing.  Appraisals, economies of scale, and higher cost create difficult challenges to modernize and expand housing in Rural Kansas.  This initiative would increase funding for several existing programs for counties with populations under 60,000.

Over a decade ago the Board of Regents developed a formula to allocate state funding for community colleges and vocational educational schools.  The formula is not in statute; only the factors to be considered.  The formula has never been implemented.  Under this formula SCCC receives less state aid.   A compromise was worked out for the future implementation of this formula to allow schools time to adjust to reduced funding, but some interests pushed for immediate implementation.  In Appropriations we successfully staved off implementation for next fiscal year and with a 50% funding cut for the following year.  This will give schools, like ours, time to deal with the funding cuts.

SB 408 Porch Piracy has become an all-too-common problem. Order something online and even though the seller or delivery service says it was delivered, the item is missing when you get home. SB 408 gives law enforcement a new tool to make sure that those who engage in “porch piracy” are stopped. The bill strengthens penalties for those who engage in a pattern of stealing items from porches like those who engage in serial shoplifting.

On Friday, the House Redistricting Committee passed an amended map for reapportioning the House’s 125 seats based on population shifts in our state. This map is the result of a bipartisan compromise. The map makes several tweaks from the original map introduced in committee this week. Highlights of the Freestate 3 map include:

• Priority was given to keeping rural counties whole, especially in Western Kansas.  This helps county election officers be efficient with local elections by avoiding creation of unnecessary new voting districts in lower populated areas. It also makes it easier for citizens to know who their Representatives are when needing assistance or voicing concerns to their legislators.

• Keeps new districts close to the ideal population for each district, with the deviation varying by just over 3 percent.

We all watched with horror the scenes from Ukraine following the Russian invasion: bombed out children’s hospitals, a pregnant mother carried out on a stretcher, and streams of women and children fleeing the fighting.  The House overwhelmingly supported House Concurrent Resolution 5032, to honor the commitment and resilience of the Ukrainian people fighting against the Russian invasion. The resolution condemns not only the Russian invasion, but all attempts to establish tyranny over other sovereign nations.  The House urges support by the United States, the members of the North Atlantic Treaty Organization (NATO), and all freedom-loving countries to provide aid and support to the Ukrainian people during this aggression. Copies of the resolution will be sent to the Ukrainian and Russian ambassadors to the United States and to each member of the Kansas Congressional delegation. The resolution passed the House on a vote of 119-4.

Bills like this are a great way to get students interested in the workings of government and learn more about Kansas. This bill was originated by Sabetha Elementary school children. They researched and identified four native fruits to choose from - the American persimmon, gooseberry, red mulberry, and Sand Hill plum. A teacher reached out to other Kansas school children over the summer, and received replies from 24 schools, representing more than 400 Kansas kids. The students selected the Sand Hill plum over the red mulberry.  The House Federal and State Affairs Committee heard testimony from students from across the state.

Legislation considered by the Kansas House this week

• HB 2528 Removing inflatable devices that are owned and operated by a nonprofit organization from the requirements of the Kansas amusement ride act.

• SB 366 Specifying that the crime of burglary includes, without authority, entering or remaining within any locked or secured portion of any dwelling, building or other structure, with intent to commit another crime therein.  Recent cases have seen criminals attempt to argue that they did not commit burglary because they had a right to be in the building they were in, even though they broke into a secure area to commit a crime. In one case, the criminal did this in a church.