If we don’t stand for our rights, we won’t have them 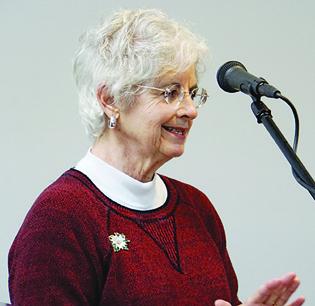 When I decided to address a couple of political issues, it was just what everyone was discussing about — the Grier House and the experimental vaccine.

Since I’ve been home, that’s changed.

We are a very sick nation!  Anyone with more than two connecting brain cells has to see what we’ve allowed to happen not only to America but to those other nations that depended upon us.

A cardboard replica of a man supposing to be our president that gets pulled away from his own sanctuary on demand to attempt reading from notes and teleprompters that have been prepared for him to deliver to the nation should have had us, as a nation, put a stop to it long ago. Sadly to say, our Republican representatives along with the Democrats are hugely responsible; largely for what they want  — financial and political power.

Each one helping for our demise needs to be voted out but by then there won’t be anything left.

It’s convenient to blame Fauci for the wide-pendulum effects of “following the science.” I do blame him, but you have to include all with political powers that are enhancing and promoting this spiral into one global control.

One hundred and seventy million willing people have been vaccinated, but Biden (not really him) says the other unwilling 80 million will cause them to get sick again. If masks and injections work, what are they worried about?  Maybe frequent boosters will help.  Apparently there is no longer a cold or flu virus, so we can naturally assume the experimental vaccine has effectively eliminated them.

Today is just another day the ones on the dark side are striking another blow to the millions who are just plain ignorant or can’t accept what is falling down around us.

Now we’re told Biden is going to do anything he has to, to get what he wants.  Let’s see:

Oh yes,  how about the nice places they’ll have for those who don’t comply? Will they be as nice as the ones on the border, less crowded, virus free?

We have been told there are many with COVID, but where did they put them? Looks like they’re still crowded on the floor with a plastic sheet. Good enough if the administration isn’t unconvinced.  How about the ones just in from Afghanistan?  Word is all have been tested and backgrounds checked, and no one allowed to leave our military bases. Videos of them leaving the military bases in Ubers, never to return. Ungrateful ingrates. Just think what wonderful futures our government wanted to offer them. To hell with all the worthless Americans.

To the Americans worth saving, please, start taking care of your own physical, mental, and spiritual health as well as others.

Stand up for your American rights or you will surely lose them. Stop depending on someone else to do it for you.