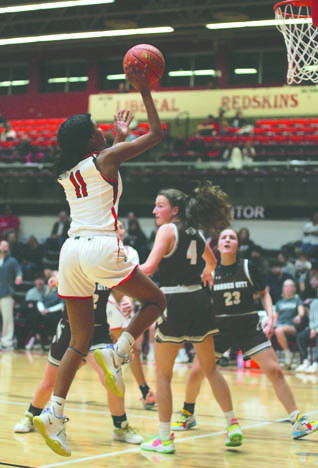 Hailey Contreras broke a 4-4 tie with a three pointer that sparked a 16-0 run for the Lady Redskins in the first quarter that pushed Liberal to a 20-4 lead.

Contreras added another basket during the run, Ashley Carrillo dropped a three-point sho and another basket, Bree Horyna connected on a pair of baskets, and Keyona Hall completed the run with a lay-up, and the Lady Redskins only allowed one more Garden City basket in the period before taking a 20-6 lead.

Horyna opened the second half with a three, but both sides picked up the defense pressure in the second half, and the Lady Redskins were only able to expand their lead by three by the end of the period, 44-21. 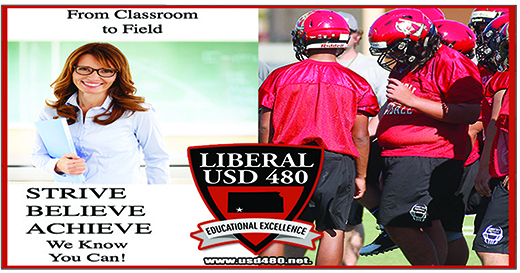 Garden City cut the lead to 20 with a three pointer to start the fourth quarter, but the Lady Redskins responded with a 9-2 run with baskets from Contreras, Carrillo, Hallie West and a three from Horyna, and the Lady Redskins were only three points away from enacting the running clock with a 53-26 lead.

Contreras added another basket with 3:12 to play, and the Lady Redskins only needed one more point to keep the clock running.

But Garden City fought off the running clock with a three pointer by Ryann Warren, and Liberal coach Brandi Fowler made massive substitutions in the final quarter, and Garden City trimmed the final tally to 57-36.

“We were really focused on getting our inside game going,” Fowler said. “We really tried to work the ball inside out. We were pleased with the amount of times we got it inside. We pride ourselves on defense and always work hard on that end.”

Carillo has the ability to dominate in scoring, but she can also create opportunities for others, and that has led to a more balanced scoring attack.

“I asked one of the coaches, ‘Who is scoring?’” Fowler said. “Everyone is scoring but no one was standing out. We were pleased with how balanced it was. Any time you can score over 50 with that balance it’s nice to see. (Carrillo) had six assists, and was passing well. That’s nice to see. It’s about leadership. When you are a great leader, you find the balance. She does a great job of it. We talk a lot about sharing it around. She is a great kid to coach and we look forward to seeing more of it.”

“It’s big time,” Fowler said. “We are excited. We hope to get a big crowd and feed off the energy. It will be a good show and a great game to see.”