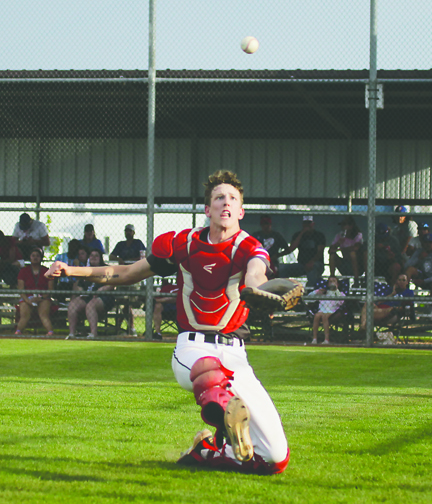 Shay Kerr attempts to catch a foul ball against Dodge City Tuesday at the National Beef Family Sports Complex. Kerr and the Redskins had a rough start and allowed six runs in the first inning, and despite a rally, Liberal lost 12-7. L&T photo/Earl WattEARL WATT • Leader & Times

Hunter Huskey had a strong day at the plate, but he was left stranded three times in a 12-7 loss to Dodge City Tuesday.

Liberal coach Eric Olmstead made an early switch, trading Shay Kerr and Aiden Schwindt at pitcher and catcher, and Schwindt, coupled with a better defensive effort by the Redskins, was able to  hold the Red Demons scoreless for the next four innings.

During that time, the Redskins pushed three runs across the plate in the third inning and another in the fourth to cut the lead to 6-4.

But the Red Demons were able to get to Schwindt in the sixth for three runs to push the lead back to 9-4.

Liberal scored another run in the sixth to cut the lead to 9-5, but Oscar Rubio allowed three hits and three runs in the seventh, and the Red Demons took a 12-5 lead.

Liberal loaded the bases with no outs in the seventh and pushed two runs across the plate before the rally fell short, and the Redskins lost 12-7.

Huskey led the Redskins with three of the team’s six hits and scored twice. He was stranded on base three times.

Carlos Campos, Rubio and Zayden Martinez each had a hit in the loss.

Martinez and Huskey each had a double.

The Redskins will finish the regular season today with a single game rematch against the Red Demons in Dodge City.