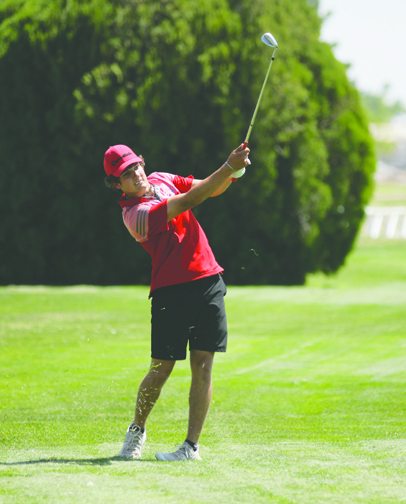 Logan Miller takes a shot on the ninth hole at Willow Tree Golf Course Tuesday during the WAC golf tournament. The day turned out to be the warmest event of the season, and Logan Miller turned in a 94 on the day. L&T photo/Earl WattSpecial to the Leader & Times

“The Redskins got to play their home tournament in one of the nicer days of the spring,” Liberal coach Nick Rotolo said. “The scores reflected it as well as Garden City had five players finish in the top 10 to run away with the team title. The Redskins shot their lowest score total in the past two years with a 366. The team did finish fifth but there were some bright spots. Joe Haskell set a new personal best with a 99. Ryan Mein led the team with an 86, Carson Gilmore shot 87, Logan Miller 94, Tacoma Gilmore 107, and Josh King 111.”

For the season WAC standings, Garden City leads with 13 points, Dodge City and Hays are tied for second with nine points each, Liberal is fourth with five points, and Great Bend is only one point behind in fifth with four points. “The JV also played well and had some players shoot their best rounds of the season in their last tournament,” Rotolo said. “Enrique Franz shot a 101, Aden Freeland had a 102, Asher Kinsinger finished with a118, and Jacob Knoll turned in 146.”

Liberal will finish the regular season today when they play at Great Bend.

The regional tournament will follow, and qualifiers will then head to the state tournament.