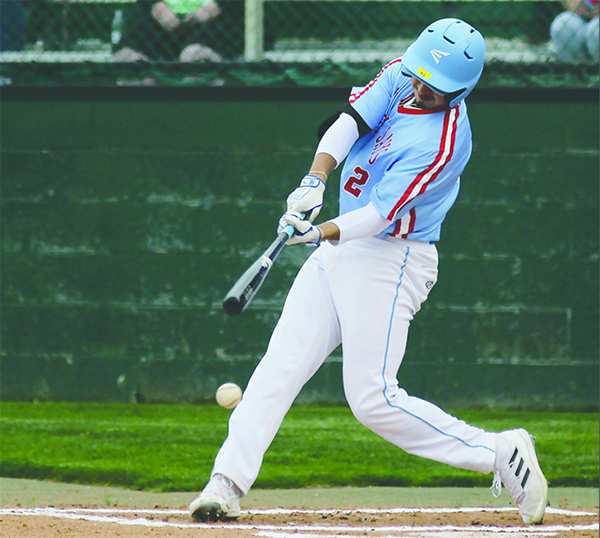 Gavin Brzozowski takes a swing against Dodge City earlier this season. The Bee Jays are off to an 8-2 start, 6-0 in the Rocky Mountain League and will host the Hays Larks at 7 p.m. Tuesday after a 10-game road trip. L&T photo/Earl WattEARL WATT • Leader &Times

After playing five straight non-league games, the Liberal Bee Jays will return to Brent Gould Field Wednesday to return to Rocky Mountain League action at 7 p.m. when they host the Hays Larks. So far, the Kansas teams have been leading the Rocky Mountain League with the Bee Jays a perfect 6-0 in their first season in the league. Hays joined the league last year and is currently second with an 8-1 record. Dodge City joined the RML with the Bee Jays this season, and after an 0-2 start with losses to the Bee Jays, the A’s have moved to 6-3 and third place in the RML, trailing the Bee Jays by a game and a half. Liberal has only played one game at home this season before heading to Dodge City for a single game and then four straight games against Colorado teams in the Denver area.

The Bee Jays won all six games to start the season for a 6-0 record. Since then, the Bee jays split a pair of games with Haysville near Wichita and then returned to Dodge City for a 7-6 loss in a nonleague game. The Bee Jays then traveled to Oklahoma City where they defeated the Oklahoma City Sandlot 9-2 but lost to the Oklahoma City Drillers 6-2. That moved Liberal to 8-3 on the season, and after the 7-0 start, the Bee Jays have dropped three out of their last four games. But all of the losses have come in nonleague games. Wednesday, the Bee Jays will return to Brent Gould Field after the 10-game road trip to face arguably the toughest challenge of the season so far. Former Jayhawk rival Hays will return to Liberal after a two-year hiatus. After the Jayhawk League disbanded when the eastern teams joined the leagues closer to Wichita, the east-side teams were left to find new leagues.

Liberal participated in the Kansas Collegiate League while the Larks joined the RML. Two years ago COVID caused several teams to suspend their seasons, but the Bee Jays played independent and qualified for the National Baseball Congress World Series. Last year the Bee Jays won the Kansas Collegiate League, but the league was not affiliated with the NBC. Still the Bee Jays earned an at-large bid and then opted to join a league that was affiliated with the NBC World Series. They made the move to the RML along with Dodge City. That move brought back the rivalry between Liberal and Hays. The two teams battled for the Jayhawk League crown for several years, and in 2000 the two teams faced off in the NBC World Series national championship with the Bee Jays winning. The long history between the two teams dates back to the 1970s when the Jayhawk League was formed, ad after a two-year layoff the two teams will face off again at 7 p.m. Wednesday at Brent Gould Field with first place of the RML on the line.