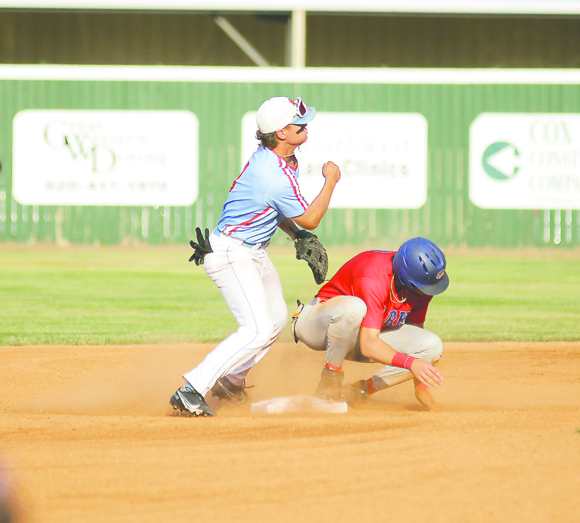 The Bee Jays start a double play in the second inning against Hays Wednesday at Brent Gould Field. The game was 0-0 after two innings when a rain storm hit Liberal and caused the game to be postponed until today. L&T photo/Earl WattEARL WATT • Leader & Times

The Bee Jays left the bases loaded in the first inning and had a 3-1 hitting advantage over Hays after the first two innings Wednesday at Brent Gould Field, but a thunderstorm hit the area and caused the game to be suspended.

The two teams have not played each other since 2019. Hays did not field a team during the COVID season of 2020 while the Bee Jays played an independent schedule.

But the KCBL did not affiliate with the National Baseball Congress, something that the Bee Jays have been associated with since the 1950s.

This year, the Bee Jays and Dodge City A’s joined the Rocky Mountain League which is associated with the NBC.

The suspended league game with Hays will begin at 5 p.m. tonight with Game 2 to follow.