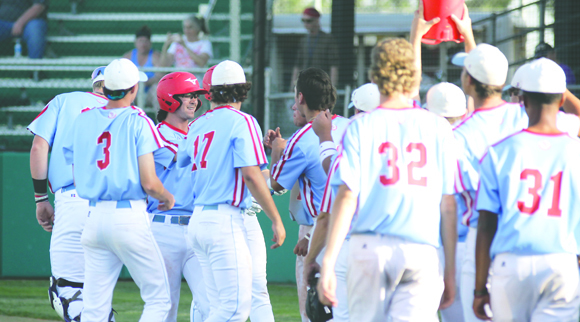 Ryan Leary (red helmet) heads to the dugout and receives congratulations from his teammates after scoring a run in the bottom of the eighth inning in a come-form-behind 5-3 win for the Bee Jays Thursday. Liberal dropped the second game of the twinbill 3-2. L&T photo/Earl WattEARL WATT • Leader & Times

After Wednesday’s game was rained out after just two innings, the Bee Jays and Hays Larks resumed the game in the top of the third inning Thursday, and the Bee jays needed a late rally to come away with a 5-3 win. Liberal took a two-run lead in the bottom of the fourth, but Hays rallied with a run in the sixth to cut the Bee jay lead in half. Liberal struggled with errors and walks late, and Hays took advantage with two runs in the top of the eighth to take a 3-2 lead. But the Hays pitching faltered in the bottom of the eighth, and after back-to-back hits led off the inning, the Bee Jays were able to load the bases with no outs.

A sacrifice fly allowed the Bee jays to tie the game 3-3, and another sacrifice fly gave the Bee Jays a 4-3 lead. A single pushed an insurance run across the plate, and the Bee Jays led 5-3. Hays opened the ninth with a single, but the Bee jays were abel to record three straight outs to preserve the come-from-behind win. The regularly scheduled game for Thursday began afterward but was cut to a seven-inning game.

Hays scored two runs in the second inning and added another in the third for a 3-0 lead. The Bee Jays cut the lead to 3-1 in the fourth when Jack Arthur clanged the ball high off the scoreboard in left center for a solo home run. The Bee Jays had a chance to score more in the fifth, but Ryan Leary was called out at home on a close play.

The Bee Jays added another run in the seventh and had a chance for more but left a runner stranded at third, and the shortened game ended with a 3-2 Liberal loss. Liberal hosted the Colorado Springs Outlaws for a three-game weekend series.