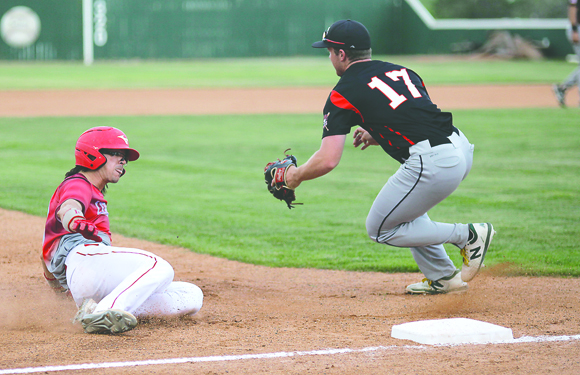 Ryan Leary slides safely into third base against the Colorado Springs Outlaws Thursday in the firts game of a three-game series. The Bee Jays won all three games by run rule, 21-6, 16-5 and 16-5. L&T photo/Earl WattEARL WATT • Leader & Times

The Bee Jays scored 10 runs in the first inning against the Colorado Springs Outlaws, and that scoring explosion continued for three games in a series sweep that protected Liberal’s position at the top of the Rocky Mountain League.

After the strong first inning, the Bee Jays went on to belt out 21 hits in the first game of the series. Liberal started with a 10-0 lead until the Outlaws pushed three runs across the plate in the third inning.

The Bee Jays added a run in the fourth for an 11-3 lead, but the Outlaws pushed two more runners across the plate to squeeze the lead to 11-5.

But the Bee Jays put the game away with seven runs in the fifth inning and then scored three more in the sixth for the 21-6 lead.

The Bee Jays kept the Outlaws scoreless in the seventh to earn the run-rule win.

Gavin Brzozowski continued to contribute as the lead-off batter and finished with four doubles, three RBIs and three runs scored.

Zach Yorke, Caden Hensley Ethan Fray and Ryan Leary all had two-hit games, and Cooper Hext, Conner Westenberg, Tyce Armstrong, Luke Smith, Jordan Thompson and Zeb Ruddell each had a hit which totaled 12 Bee Jay players to get a hit in the game.

Hunter Estill came in relief and tossed two innings and allowed two runs on three hits and a walk while striking out three.

Jett Brown completed the game by pitching the seventh inning and did not allow a hit or a walk while striking out one.

The Bee Jays had another early start Saturday in Game 2 of the three-game series by scoring three runs in the first inning and two more in the second for a 5-0 lead.

Liberal added two more runs in the fourth and four more in the fifth for an 11-0 lead.

But the Outlaws put together a big inning in the sixth when they pushed five runs across the plate to cut the lead to 11-5.

Liberal countered with five runs of their own in the bottom of the sixth, and after a scoreless seventh the Bee Jays came away with the 16-5 run-rule win.

Armstrong led the Bee Jays in RBIs at the plate with three hits and four RBIs while scoring once.

Hensley had the most hits in the game with four, and he had three RBIs while scoring twice.

Brzozowski, Grady, Hext and Jordan Thompson each had two-hit games, and Leary and Chance Reisdorph each had a hit.

Luke Barbier had a strong start for the Bee Jays with four scoreless innings and only allowed two hits and three walks while striking out seven.

Sean Brady came on in relief and allowed five runs on five hits while striking out four.

Liberal completed the sweep on Sunday with another strong start. After allowing a run in the first inning, the Bee Jays responded with six runs in the bottom half of the first.

Liberal pushed out to a 9-1 lead with three more runs in the fourth, and after the Outlaws scored a run in the fifth, the Bee Jays retaliated with five runs in the bottom of the fifth for a 14-2 lead.

But the Outlaws reduced the lead to nine after scoring three runs in the top of the sixth, but Liberal regained a double-digit lead in the bottom of the inning with two more runs, and a scoreless seventh led to a 16-5 run-rule win.

Brzozowski had three of Liberal’s nine hits and had two RBIs while scoring twice.

Yorke had a two-hit game and had an RBI while scoring three times.

Liberal will host Dodge City Wednesday in a non-league game.