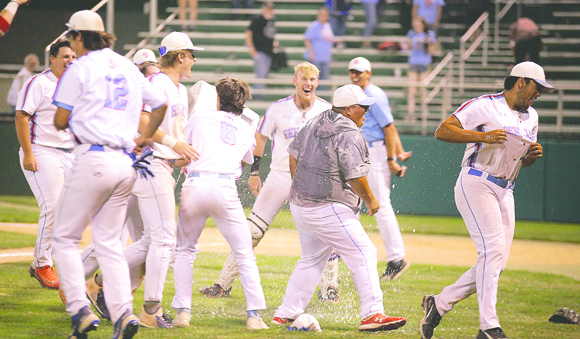 Liberal Bee Jay coach Jared Mayeda is surprised by a dousing of the ice bucket Thursday at Brent Gould Field after his first win as the head coach. Jim Blair was hired as a new coach and had to leave the team, and Mayeda was elevated to head coach. L&T photo/Earl WattEARL WATT • Leader & Times

Between innings Thursday at Brent Gould Field, the Liberal Bee Jays ran a football play on the sideline, but the pass was made with a baseball. The Dodge City A’s did the same thing on their side of the field, but they were using a football.

And the focus on baseball has the Bee Jays sitting on top of the Rocky Mountain League with a 10-1 record, 13-4 overall.

The Bee Jays scored four runs in the first inning including home runs by Gavin Brzozowski and Ethan Fray.

Dodge City pushed a run across the plate in the fourth to cut the lead to 4-1, but the Bee Jays broke out in the fifth inning with six runs, five of those scoring with two outs, and the Bee Jays had a 10-1 lead.

Liberal had chances to score in the sixth with the bases loaded and only one out, but Dodge City was able to avoid the run rule by stranding all three Liberal runners.

The Bee Jays again had a runner on third in the bottom of the seventh and could not get the final score.

But the Bee Jays finally pushed the 11th run across the plate in the eighth when Ryan Leary hit an RBI single that scored Conner Westenburg, and the walk-off score led to the 10-run rule victory, 11-1.

Following the win, the Bee Jays doused coach Jared Mayeda with the ice bucket. Mayeda was coaching his first game as the head coach of the Bee Jays after Jim Blair was hired to a new coaching job.

Gavin Brzozowski, Keaton Grady, Tyce Armstrong, Ethan Fray and Ryan Leary all had two hits in the win. Brzozowski and Fray each had three RBIs.

Hunter Estill pitched four innings and allowed one run on four hits and two walks while striking out eight.

Nick Moore tossed three scoreless innings and only allowed one hit while striking out three.

Jett Brown pitched the final tow innings and didn’t allow a run or a hit while striking out one.

Liberal will take today off before opening a three-game series at Brent Gould Field against the Denver Cougars beginning Friday.