How good are the Bee Jays at midpoint? 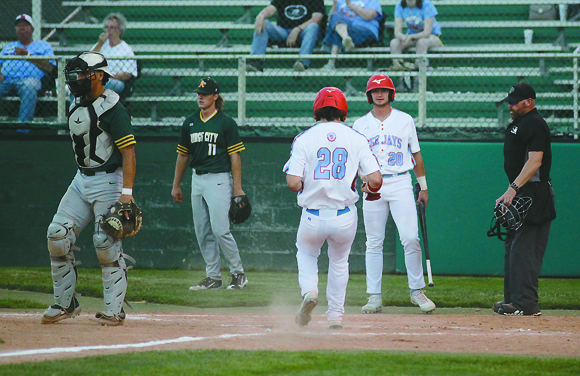 The Liberal Bee Jay season will have passed the midway point following the Fourth of July game with the Dodge City A’s, and with half of the season in the books, it’s a good time to evaluate the first half and see what would be realistic expectations for the rest of the season.

Midway through the conference season, the Bee Jays have established a solid spot as one of the better teams in the Rocky Mountain League in the first half, and it comes as no surprise that the team nipping at their heels is Hays. The Larks and Bee Jays have a storied past, and no matter what league they both call home, they both have gravitated to the top.

Liberal’s pitching has been phenomenal this season, particularly against league opponents. The starting pitching has done a good job of allowing the Bee Jays to take early leads by keeping the opponents off the scoreboard, and that has led to an easier task for the bullpen.

At this point, the starters are ahead of the relievers, but the coaching staff has a large staff and is getting innings for everyone. As the season progresses, that rotation could tighten which could lead to an improvement on the mound.

This has been one of the better offensive teams for the Bee Jays. Nine of the 14 wins have come by double digits.

Granted the RML may not be the strongest league overall this season, but good teams are supposed to score against lesser teams, and the Bee Jays are doing that.

This team is not relying on home run power but in driving the ball into the gaps and against the wall. Even if pitching struggles, the Bee Jay offense has been able to overpower opponents.

But to get to the NBC World Series and advance deep, the Bee Jays will have to become more consistent. So far, runs have come in spurts, and opponents have been able to score in spurts as well.

Liberal will have more home games in the second half of the season than the first, which should be an advantage, but with the Larks looking, the RML title is not secure. But it is realistic for Liberal to finish in the top two and earn an NBC bid.