ADVANCING AT THE NBC: Bee Jays advance to championship bracket 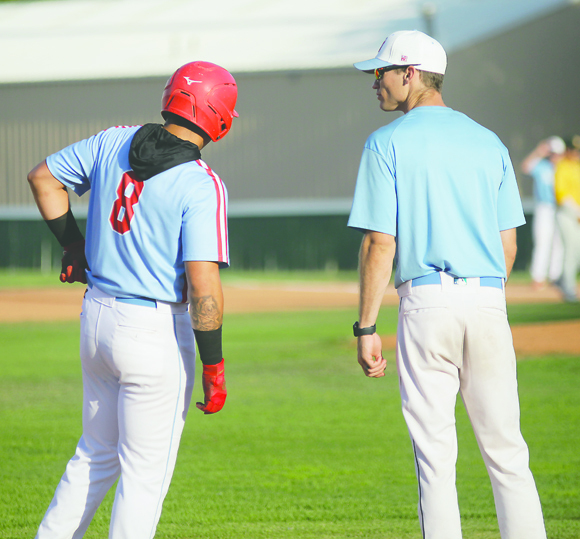 Liberal’s Daylan Pena (8) talks to Kelby Tomlinson at third base earlier this season. Peña and the Bee Jays have advanced to the final eight teams at the NBC World Series in the single elimination bracket. L&T photo/Earl WattEARL WATT • Leader & Times

Despite the cancellation of today’s final game of pool play, the Liberal Bee Jays have already qualified for the NBC World Series championship bracket that begins Thursday.

The Bee Jays punched their ticket after defeating the TBT Ballers 9-1 in the first game of pool play Friday and then defeating the Cheney Diamond Dawgs 8-4 Sunday.

With four teams in each pool, and the Bee Jays scheduled to play the 0-2 Waco Winners today, the Bee Jays will be the top team to advance since the Bee Jays have already defeated Cheney and TBT and Waco will not be able to compete due to a lack of players. Whoever wins the Cheney/TBT game today will be the runner-up from the pool since they both already lost to Liberal.

Late scoring has been key in the first two games for the Bee Jays.

Liberal had a 2-1 lead over the TBT Ballers after the sixth inning before the Bee Jays erupted for five runs in the seventh and two more in the eighth to enact the run rule and  the 9-1 win.

Jackson Berry pitched seven innings and only allowed one run on four hits without walking a batter and striking out six. Nick Moore pitched a hitless inning and only walked one.

Ryan Leary led the Bee Jays with a three-hit game and two RBIs. Keaton Grady and Zach Yorke each had two hits, and Conner Westenburg had two RBIs.

Liberal added four runs in the top of the ninth, and the runs turned out to be crucial after the Bee Jays allowed three runs in the bottom of the ninth before securing the 8-4 win.

Paul Bonzagni had a strong start pitching six scoreless innings and allowing seven hits and no walks while striking out six.

Luke Barbier pitched two innings of relief and allowed one run on two hits and no walks while striking out three.

Colby Diduch came in for the ninth and allowed three runs on two hits and a walk including a home run while striking out one.

The four teams already qualified for the championship bracket are the Seattle Studs, Santa Barbara Foresters, Austin Lonestar and the Bee Jays.