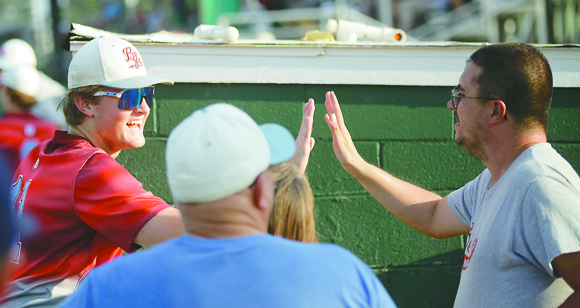 Liberal third baseman Tyce Armstrong gives a high five to Kevin Kaup after hitting a home run earlier this season. The Bee Jays have advanced to the Final Four of the NBC World Series after a bracket win against the Haysville Aviators and will face familiar foe Hays Larks for a trip the the national championship game. L&T photo/Earl WattEARL WATT • Leader & Times

Despite six frustrating innings, the Liberal Bee Jay pitchers kept the Bee Jays in the quarterfinal game against the Haysville Aviators until the bats came alive and earned the Bee Jays a 6-1 win at the NBC World Series.

The win was the 200th at the NBC World Series for the Liberal Bee Jays, a tournament record, and the Bee Jays also set the record for most tournament appearances with their 56th bid.

But missed opportunities early allowed the Haysville Aviators to keep the game close. Liberal hit into three double plays in the first six innings and loaded the bases in the fifth inning but didn’t score a run.

The Bee Jays loaded the bases again in the sixth inning with no outs, but again they failed to score when Cody Hext struck out and Hudson Polk hit into a double play.

The Aviators crossed the plate first in the bottom of the sixth inning with a double and two singles to take a 1-0 lead.

But like they have all season, the Bee Jays responded. Ryan Leary reached on a one-out error by the shortstop and advanced to second on a hit by Gavin Brzozowski.

Tyce Armstrong added an RBI double to score Peña, and Liberal had a 3-1 lead.

Brzozowski added an RBI double in the eight to give the Bee Jays a 4-1 lead, and Cody Hext ripped a shot to right center that got by the Aviator defenders in the ninth inning and resulted in an in-the-park home run, pushing the lead to 6-1.

The Bee Jay pitching staff allowed 11 hits but only one run. Brady LeJeune-DeAcutis pitched for and two-thirds innings and allowed six hits and no runs and no walks while striking out six. Dylan Kerbow pitched  pitched an inning and allowed one run on three hits. Luke Barbier got the win by pitching three scoreless innings, and Thomas Wrehe recorded the final out.