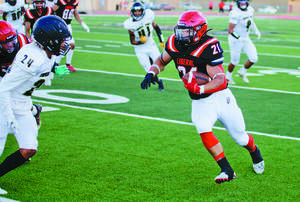 After throwing over Emporia in a 53-0 rout, the Redskin returned to Redskin Field and to the running game in a 27-0 shellacking of Topeka Friday.

Liberal galloped for 310 yards on 38 carries and three touchdowns on the ground. That’s an average of 8.2 yards per carry.

While the offense moved the ball with ease, the Angry Red defense matched the 1998 Redskins with the first back-to-back shutouts. The defense disrupted the Trojans all night, but had lapses on third downs from time to time that allowed the Trojans to keep drives alive with long conversions.

Liberal scored on its first possession of the game when Brooks Kappelmann capped a 13-play, 71-yard drive with a seven yard touchdown run, and after a two-point conversion, the Redskins led 8-0.

Adan Amador came up big for the Redskin defense with an interception in the first quarter, and Liberal relied on the defense the rest of the half. The offense moved the ball to the Topeka 17 yard line and 26 yard line but ran out of downs on both possessions.

Liberal’s best possession of the third quarter came when the Redskins took over at their own 4 yard line. Liberal moved the ball to the 16 yard line with a third down conversion pass to AB Amador, and after a pair of runs moved the ball out to the 29 yard line, Trystian Juarez broke two tackles down the right sideline and stiff armed a defender to open up a path to the end zone for a 71-yard touchdown run and a 14-0 lead.

Topeka put together a 15-play drive tha ate up seven minutes and stalled at the Redskin 21 yard line.

Kappelmann completed a 27-yard pass to Zayden Martinez on the following drive, and then he took over with his feet, running the ball three straight times with runs of 15 yards, 14 yards and capping the drive with a 26-yard run for a touchdown and a 20-0 lead early in the fourth quarter.

The defense forced a three-and-out on Topeka’s next possession, and Liberal took over at their own 20 yard line.

Liberal moved the ball 80 yards on eight plays that ended with a 20-yard touchdown pass to Aidan Schwindt and a 27-0 lead.

Ivan Moreno recovered a fumble on Topeka’s next possession at the 50 yard line, and the Redskins ran out the clock to secure the 27-0 win.

“The first half was the two worst quarters we’ve played, even worse than the first game,” Liberal coach Bryan Luetters said. “We kind of regressed a little bit, which can be expected after the high of the last game. The second half we got some things working. We made some adjustments and played a lot better. I saw four hawk tackles from our best players for the first time. We have some work to do on defense. They had a D-1 kid. Some get fired up for a challenge like that or they don’t.”

But the redskins gave a steady dose of running plays that wore down the Trojans.

“We ran the 18 sweep to the short side of the field, and it worked,” Luetters said. “We ran it until they stopped it, and they never did. It’s a mentality that this is Redskin football. This is how we are going to play, and if we play to the level we want to play at and do everything right, they can’t stop us. They knew it was coming, The corner knew it and they couldn’t stop it. We just need that all game.”

After the big night in the air, Luetters went tot he ground.

“I told them we will take what the defense gives us,” he said. “I will run Brooks 20 times if we have to. When you see your quarterback poke it in, it fires your line up. We had some big plays called back on holding, we just kept going.”