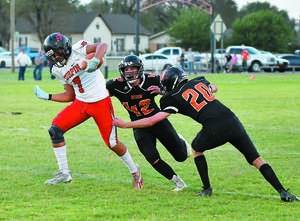 Turpin's Eduardo Aguilar (7) breaks away from Buffalo tacklers after catching a short pass. Aguilar caught a pair of passes in the Cardinals' 52-6 win over the Buffalo Bison. L&T photo/Jason EppJASON EPP • Leader & Times

BUFFALO, Okla.—Turpin’s early-season dominance continued with their fourth-straight, mercy-rule win. The Cardinals ended the game just two plays into the second half with a 52-6 win over the Buffalo Bison.

No stretch of the shortened game epitomized the Cardinals dominance quite like the final minute of the first quarter and into the second. Already leading 16-0, it was the defenses turn to put points on the board. A bad snap led to a backwards chase, John Epp knocked the ball loose from a Buffalo ball carrier and Parker fell on it in the end zone for the touchdown. Gunnar Post ran in his third conversion and Turpin led 24-0 at the end of the first quarter.

The Cardinal defense then held Buffalo to minus nine yards on their next possession, forcing a punt. It took the Turpin offense one play to get back in the end zone. Jhett Huffman went 56 yards on a reverse to put Turpin up 30-0 with 8:07 left in the half.

“I was really proud again how we came out with real intensity and focus,” Cardinal Head Coach Justin Hannah said. “One thing we preached all week is, this is a great start, but don’t get complacent. We had some guys out and had other guys step up in their place and did a great job. Carson Hendrich stepped in at linebacker and did outstanding. John Epp did a great job filling in for Bailey Boyd, of course, he’s got a lot of experience playing there. Our senior class really gives us a lot of depth.”

Buffalo was forced into another three and out on their next possession. Turpin answered with their longest drive of the night, yardage-wise, going 85 yards in seven plays. Turpin tried to run and inside running back screen, but Parker had to scramble out of the pocket to the right. Resendiz released back to the left and Parker was able to turn and get the ball to Resendiz who took it 30 yards for the touchdown. Turpin led 38-0 with 3:11 left in the half.

The Bison became the first team to score on the Cardinal defense this season on their next possession after breaking a tackle at the line of scrimmage and going 52 yards for the touchdown to make the score 38-6 with 2:55 left in the first half.

“I thought our run defense, except for the one play they slipped out of a tackle, was excellent,” Hanna said. “And that’s what Buffalo is best at-lining up in double-tight and running right at you. The fact that we were able to take away what they do best made me very proud of our defense.”

Take out the touchdown run and Buffalo was held to minus 9 yards of offense.

Turpin answered with a 10-play 56-yard touchdown drive. Eduardo Aguilar had the biggest play of the drive with a 13-yard catch and run that moved Turpin into Bison territory. Parker capped the drive with his second rushing touchdown of the night, this time from 10 yards out, putting Turpin up 46-6 at the half.

Turpin (4-0) will be off this Friday. Turpin will host Ringwood, September 30 for homecoming.