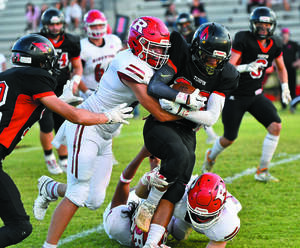 TURPIN, Okla.—The Turpin Cardinals saw the fourth quarter for the first time this season Friday night. Their dominant defense bounced back from a rocky start and the offense kept churning out yards and touchdowns in a 68-18 homecoming victory over the Ringwood Red Devils to move to 5-0 on the season.

The Cardinals’ offense scored touchdowns on nine of ten possessions, racking up 581 yards and 23 first downs with a balanced offense (291 yards rushing, 290 yards passing). The defense struggled for the first time all season, giving up 253 yards, 8 first downs, and three touchdowns to Ringwood on their first five possessions.

But it was a defensive play that turned the game to a dominant finish by Turpin. Ringwood had just scored their third touchdown of the game to cut the Cardinals lead to 34-18 with 1:42 to play. The Red Devils then forced Turpin’s first and only punt of the game. The shanked punt only traveled two yards and gave Ringwood a first down at the Turpin 36 with 29.5 seconds left in the half.

But just two plays later, Turpin cornerback Bryson Parker intercepted a pass and took it 93 yards for the touchdown to put the Cardinals up 42-18 at the half. The Turpin defense held Ringwood to minus one yard of offense on their final six drives, did not allow a first down, and only allowed three plays with a positive gain.

Meanwhile, the Turpin offense gained 210 yards on 22 plays and scored four touchdowns over the same stretch to finish off the win. Parker threw two of his three touchdown passes on the first two drives of the second half, and backups ran in a pair of touchdowns to complete the mercy-rule win.

“I liked how we had some adversity early in the game-giving up some big plays for the first time this season,” Cardinals Head Coach Justin Hannah said. “We lost some containment assignments and took some bad angles. We adjusted our defense to funnel runners back inside. Our guys picked it up quickly. I like how we adjusted and responded to the adversity. I think we had the mentality that we needed to come out and finish the game.”

Turpin started the game by taking the opening drive of the game 49 yards on 6 plays capped by a Parker’s three yard run to put the Cardinals up 6-0 with 9:43 left in the first quarter. And after forcing a turnover on downs, Parker launched a deep pass to Eduardo Aguilar who took it for an 80-yard touchdown to make the score 12-0 with 5:10 in the first quarter.

Ringwood answered with a 58-yard option play that got them on the board to make it 12-6 with 4:52 in the first quarter. Turpin answered with a 6-play, 59-yard touchdown drive. Parker found Aguilar for 28 yards on a crossing pattern on third and 13 that moved the ball from the Turpin 38 to the Ringwood 34. Three plays later, Jhett Huffman ran in his first of three touchdowns from seven yards out giving Turpin an 18-6 lead with 3:33 still to play in the first.

Ringwood came right back to make it a one score game again. The Red Devils only needed three plays to go 61 yards. Ringwood converted a third and six with a 57-yard touchdown pass to make the score 18-12 with 2:31 left in the first.

Turpin answered back again in three plays. Huffman took an option pitch 44 yards to put Turpin up 26-12 with 57 seconds left in the first quarter. The Turpin defense forced a punt that gave the Cardinals possession at their 16. Turpin took 10 plays to go 84 yards capped by an Aaron Resendiz 5-yard touchdown run. Parker hit Huffman for a key 36-yard pass play on second and ten early in the drive. Turpin led 34-12 with 6:27 left in the half.

Ringwood answered Turpin’s longest drive with their own long scoring drive, going 73 yards on 12 plays, and converting three third downs to cut the Cardinals lead back to 16 points with 1:42 left in the half. 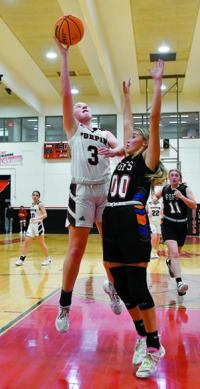 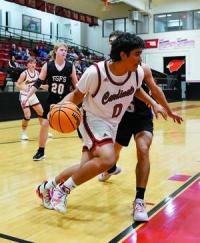 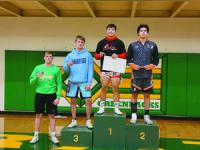 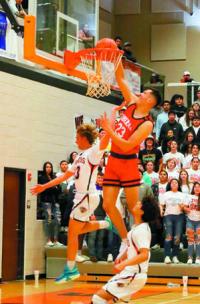