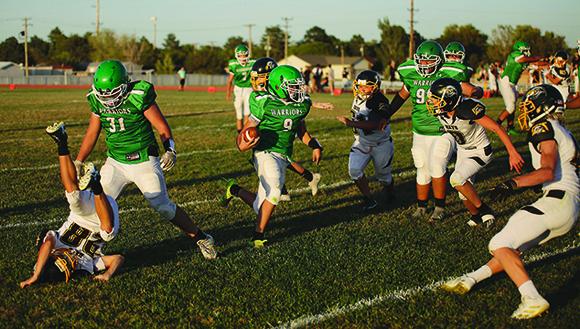 The seventh grade Warriors played their best game of them season Thursday, beating Hays for the first time since Eisenhower Middle School opened, 20-6. Jayden Heronemus led with more than 100 yards rushing and two touchdowns. Landon McNabb rushed for 50 yards and a touchdown.

The eighth grade Warriors lost to Hays 30-6. The Warriors fumbled five times and gained more than 250 yards of total offense. Leading the warrior defense was Easton Cooley who had seven solo tackles in his way to his best defensive showing of the year. Xavier Tafoya ran in the lone score for the Warriors on a nine-yard run. James Fieser had four catches for 38 yards and Jairo Martinez had 13 carries for 68 yards and also had nine tackles. Aron Duque had 5 carriers for 58 yards.

The Apaches traveled to Kenneth Henderson and the seventh grade fell while the eighth grade came away with a win.

Because of a shortage of players, the seventh grade game was played with a running clock, and the Apaches came up short.

The eighth grade game also had a running clock due to a shortage of players, and the Apaches earned a 16-0 win.

Jesse Gomez had a 23-yard pass completion to Pedro Contreras for a touchdown. Hector Aquino had a 28-yard touchdown run and a two-point conversion.

Eisenhower and Seymour Rogers face off in the Crosstown Clash Thursday.